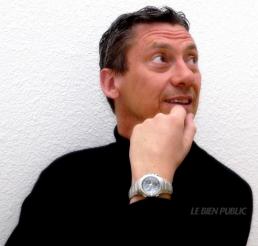 Séjourné began to compose around the time he became a faculty member at the conservatory, and has focussed increasingly on it while continuing to perform and teach.

In his works, Séjourné varies the ensembles, composing for orchestras, chamber ensembles and soloists. His music is eclectic. His compositions include incidental music and musicals, as well as dance and film music. He also works as a composer for France Culture, German television networks ARD and ZDF, and the Franco-German cultural television channel ARTE.

His incidental music composed in 1984 won the award for Best Music at the Avignon Festival. In 1988, on the occasion of the 2000th anniversary of the City of Strasbourg, he was invited to compose the music for The Invaders for the Ballet du Rhin. He wrote Planet Claviers (1998) for the ensemble Percussions Claviers de Lyon on a commission from Grame Festival. The work was performed more than 120 times between 1998 and 2001. In 2001, returning to his preference for a mixture of forms of expression, he composed Famim, a piece combining improvised, contemporary, and popular music, commissioned and premiered by the jazz pianist Michael Borstslap and the Amsterdam Percussion Group. In 2004, at the request of the Luxembourg National Theatre, he wrote the musical School Boulevard.

Séjourné has also composed concertos for percussion and orchestra, two of which have particularly attracted international attention. His Concerto for Vibraphone and String Orchestra, composed in 1999 and premièred by the Orchestra of the Auvergne, has been well received by critics. The Luxemburger Wort wrote: "[The concerto] provides living proof of the tremendous growth of the percussion and the emergence of the process of creation in contemporary music (...)". The Concerto for Marimba and String Orchestra (2006), commissioned and performed by Bogdan Bacanu accompanied by the Salzburg Soloists, has become a standard work in the marimba repertoire. Anne-Julie Caron, a Canadian percussionist, described it as "unique because it is one of the rare pieces to put the marimba in a romantic context". After a performance at the Washington Square Festival in New York, a reviewer called it "gorgeously composed". It has been recorded on the album True colors.