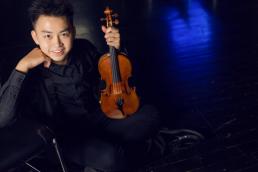 The outstanding young violinist Ziyu He was one of the youngest soloists to make his debut at the Musikverein with the Vienna Philharmonic under Adam Fischer in 2017, aged just 18. Ziyu won both the International Mozart Competition in Salzburg and the Yehudi Menuhin Competition, and was the Eurovision Young Musician of the Year.

The 2021-22 season sees Ziyu make his debut with the Wiener Symphoniker and Lio Kuokman, he is invited once more to the Singapore Symphony Orchestra with Hans Graf, and will perform with the Camerata Schweiz and Belgrade Philharmonic Orchestra with Howard Griffiths. Other recent highlights include Ziyu performing with BBC Proms in the Park, his debut at the George Enescu Festival, a return visit to the Mozarteum Orchester Salzburg with Riccardo Minasi in Salzburg’s Grosses Festspielhaus, and recitals at the Konzerthaus Vienna as part of their ‘Great Talents’ series.

Ziyu is currently continuing his residency at Vienna’s Musikverein with the Altenberg Trio Wien.

Ziyu He began playing the violin with Xiangrong Zhang in his native China at the age of five. Aged just 10, he was invited by Paul Roczek to study with him in Salzburg at the University Mozarteum where Ziyu finished his Masters studies in summer 2021 and continues his postgraduate studies with Benjamin Schmid and Paul Roczek, as well as viola with Thomas Riebl. He plays a Giuseppe Rocca violin made in 1853, kindly loaned by a private sponsor.