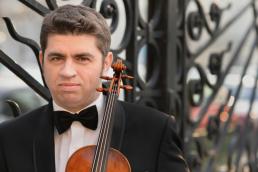 A regular guest of the Enescu Festival in Bucharest, the Bourglinster Festival in Luxemburg and Berlin International Music Festival in Berlin, Remus Azoitei has worked with artists such as cellists David Geringas and Adrian Brendel, violist Gerard Caussé, and pianists Alexandra Dariescu and Konstantin Lifshitz. In 2005, he performed Bach’s Double concerto with Nigel Kennedy, a concert broadcast on 19 Radio and TV stations across Europe and North America, including Arte and Mezzo. He has recorded for the Electrecord, Radio Bremen, Hänssler Classic, and Chandos labels. He has received “The Cultural Order”, a decoration offered to him for his achievements by the Romanian President; has has also received the title of “Officer of the Romanian Crown” from King Michael of Romania.

Over the years, Remus Azoitei has developed a successful artistic partnership with pianist Eduard Stan. Apart from a very large number of performances they have given as a duo, the two artists recorded together the first ever entire repertoire for violin and piano by George Enescu. Launched by Hänssler Classics on 2 CDs in 2007, this collection immediately attracted international acclaim.

Remus Azoitei studied with Dorothy DeLay, Masao Kawasaki and Itzhak Perlman at the Juilliard School in New York, where he was awarded a scholarship to study for his master’s degree. He then travelled to London to work with Maurice Hasson at the Royal Academy of Music. His past teachers also included Daniel Podlovsky at the Bucharest Conservatoire as well as Bujor Prelipcean, leader of the Voces string quartet.

In 2001, Remus Azoitei was appointed violin professor at the Royal Academy of Music in London, at the time becoming the youngest ever violin professor in the history of this institution. He is the Artistic Director of the Enescu Society in London, also being one of its founding members.

Remus Azoitei plays a Niccolo Gagliano violin made in 1755.