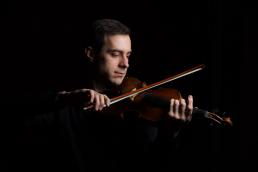 The violinist Leonard Furda is a member of the Vienna Chamber Orchestra, born in 1986 in Cluj-Napoca, Romania. He started studying violin in the Music School of his birth town at the age of 7 and later graduated his Bachelors and Masters degrees in the Music Academy of the same city, under the guidance of Prof. Victoria Nicolae.
Immediately after, in 2010 he moved to Vienna and perfectioned his technical and musical skills in the Konservatorium Wien Privatuniversität (currently Musik und Kunst Privatuniversität), under the guidance of Prof. Thomas Christian.

During his studies, Leonard Furda won the 1st prize in six Romanian national violin competitions and the 3rd prize in the International competition “Stefan Ruha”, in Satu-Mare (Romania).
His big passion has always been the stage, where he had numerous chances to perform his favourite repertoire, such as the violin concerto by Brahms or the virtuoso masterpieces Zigeunerweisen and Carmen Fantasy by Sarasate, accompanied by several Romanian symphonic orchestras in concert halls such as Atheneum in Bucharest or Carl Orff Gasteig, Munich.
Since 2004 he performed numerous duo recitals in Germany and Italy with his close friends, the pianists Csiky Boldizsár and Leonhard Westermayr.