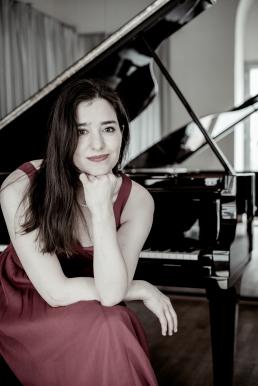 Born into a family of artists, Agnes Wolf started her piano education at the age of nine at the Vienna University of music and Performing Arts, where she studied with Imola Joo, Hans Petermandl and Roland Keller. She also worked with Meira Farkas and Richard Hyung-ki Joo, and joined masterclasses with Elisso Virsaladze.

While still very young, she was a laureate at the Steinway competition for children and won the first prize in the main national contest "Jugend musiziert" several times in a row. She was awarded prizes and scholarships by the Austrian Soroptimist Club, by Bösendorfer and by the Fohn Foundation, and was selected for the concert series "Podium junger Künstler" and "Musica juventutis".

At the age of 16 she made her solo debut at the Konzerthaus Vienna with Mozart's concerto in e flat major, KV 499, accompanied by the Vienna Chamber Orchestra.
Other orchestras she has performend with include the "Franz Schmidt Kammerorchester", Sinfonietta Vorarlberg, Camerata academic Freiburg, Ensemble "Wiener Klangrede", Philharmonic Orchestra Rzeszow, the "Vienna Classical Players", the "Wiener Concert-Verein" and the "Wiener Kammerphilharmonie".

She gave concerts in many european countries, the United States, Israel and Japan, performing in places like the Austrian Cultural Forum New York, the main houses in Austria including Musikverein and Konzerthaus Vienna, and festivals like the Bregenzer Festspiele, the Schumann-Festival Endenicher Herbst and the Chamber Music Festival in Kyoto.

As a chamber musician she worked with members of the Vienna Symphony Orchestra and of the Vienna Philharmonic Orchestra, and with many different ensembles of various kinds.

She particularly enjoys playing with her father Robert Wolf, who is a flute soloist of the Vienna Symphonic Orchestra and of the Concentus Musicus. They both like to initiate the development of new music for flute and piano and they have already given a number of successful first performances of compositions dedicated to them.

Since 2008 she has a teaching contract at the Vienna University of Music and Performing Arts.