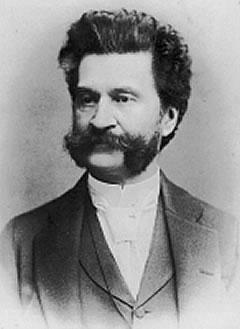 Strauss was the eldest son of the composer Johann Strauss the Elder. Because his father wished him to follow a nonmusical profession, he started his career as a bank clerk. He studied the violin without his father’s knowledge, however, and in 1844 conducted his own dance band at a Viennese restaurant. In 1849, when the elder Strauss died, Johann combined his orchestra with his father’s and went on a tour that included Russia (1865–66) and England (1869), winning great popularity. In 1870 he relinquished leadership of his orchestra to his brothers, Josef and Eduard, in order to spend his time writing music. In 1872 he conducted concerts in New York City and Boston.

Strauss’s most famous single composition is "An der schönen blauen Donau" (1867; The Blue Danube), the main theme of which became one of the best-known tunes in 19th-century music. His many other melodious and successful waltzes include "Morgenblätter" (1864; Morning Papers), Künstlerleben (1867; Artist’s Life), "Geschichten aus dem Wienerwald" (1868; Tales from the Vienna Woods), "Wein, Weib und Gesang" (1869; Wine, Women and Song), "Wiener Blut" (1871; Vienna Blood), and "Kaiserwaltzer" (1888).

Of his nearly 500 dance pieces, more than 150 were waltzes. Among his stage works, Die Fledermaus (1874; The Bat) became the classical example of Viennese operetta. Equally successful was Der Zigeunerbaron (1885; The Gypsy Baron). Among his numerous other operettas are Der Karneval in Rom (1873; The Roman Carnival) and Eine Nacht in Venedig (1883; A Night in Venice).