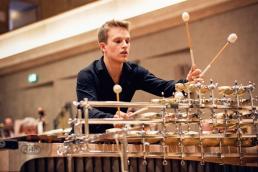 Christoph Sietzen has been praised by the media as an outstanding talent – a refreshingly natural musician notable for his technical mastery and powerful stage presence. He gave his debut at Salzburg Festival aged 12 and was a prizewinner at the prestigious ARD International Music Competition in 2014. In 2018 he was awarded the ICMA (International Classical Music Awards) Young Artist Award and the European Concert Hall Organisation (ECHO) named him a Rising Star for the 2017/18 season.

In the current season Christoph is featured as „Great Talent“ by Vienna’s Konzerthaus, where he will be performing regularly. He will also perform at the Golden Hall of the Vienna Musikverein, the Great Festival Hall Salzburg, the Romanian Atheneum Bucharest and the Philharmonie Luxembourg as well as a recital tour across several cities in Austria. Further highlights include appearances at the Grafenegg Festival with the Tonkünstlerorchester under Yukata Sado and at the Sound Unbound Festival at the Barbican London with the Academy of Ancient Music. He will also appear on shows of the Bavarian Broadcasting, the Deutschlandfunk and the ZDF.

"Awesome technique, unrelenting intensity, tremendous power, breath-taking speed, idiosyncratic presence and a profound musicality would be some of the superlatives needed to describe the talent of the Luxembourgish-Austrian percussionist Christoph Sietzen."
- Pizzicato Magazine

Christoph Sietzen, a citizen of Luxembourg, was born in Salzburg. He started learning percussion at the age of six, taking lessons from Martin Grubinger, Sr., and later attended the Anton Bruckner Private University in Linz, where his teachers were Bogdan Bacanu, Leonhard Schmidinger and Josef Gumpinger. He also studied double bass and harpsichord, taking a special interest in baroque repertoire. Since 2014 he has held a teaching position at Vienna’s University for Music and the Performing Arts.

Composers who have written works for Christoph Sietzen include Stewart Copeland, formerly of rock band “The Police”, Alexander Mullenbach, Ivan Boumanns, Jakob Gruchmann and Alexander Wagendristel, while a new concerto has been commissioned from Georg Friedrich Haas by the Philharmonie Luxembourg. Sietzen also regularly gives masterclasses, which have taken him to China, Japan, the Netherlands, Portugal, Romania and Spain.

Christoph Sietzen’s solo CD received the Pizzicato Supersonic Award, taking its name from a work composed for Sietzen by Emmanuel Séjourné: “Attraction”. Pizzicato magazine described it as “a stupendous solo performance in every respect”. It also features music by Bruce Hamilton, Arvo Pärt, John Psathas, Andrew Thomas and Iannis Xenakis. His most recent album featuring the percussion concerti by Avner Dorman and Einojuhani Rautaavara was released in September 2018. Additionally, Christoph has made a number of recordings as a member of The Wave Quartet. The album “Loco”, released on GENUIN classics in 2016, features music by Astor Piazzolla, Carlos Gardel and the Mexican duo Rodrigo y Gabriela, while the 2017 release “Lauda Concertata” takes its name from a marimba concerto by Akira Ifukube. The quartet’s discography includes arrangements of works by Bach and other baroque composers, and a new disc with compositions by Johann Sebastian Bach, recorded with L'Orfeo Barockorchester, was released in 2017 by Sony Classical and awarded with the Supersonic Award.