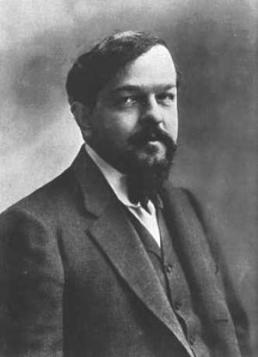 Claude Debussy was born on the 22nd August 1862 in Saint-Germain-en-Laye, France.

In 1880, Tchaikovsky commented on one of Debussy's early pieces: "It is a very pretty piece, but it is much too short. Not a single idea is expressed fully, the form is terribly shriveled, and it lacks unity."

It was not until 1894, aged 32, that Debussy completed the first piece to truly declare his independence of thought: Prelude a l'Apres-midi d'un Faune, a highly innovative piece inspired by a poem of Stephane Mallarmé.

After his first successes, Debussy began serious work on his opera Pelleas et Melisande (completed in 1902) and the three orchestral Nocturnes (completed in 1899).

Debussy entered a new creative phase in 1903 with La Mer, completed while staying in Eastbourne, where he observed that "the sea behaves with British politeness".

The success of Pelleas et Melisande's long-delayed premiere in 1902 made Debussy a celebrity. He subsequently began a passionate affair with Emma Bardac, one-time mistress of Gabriel Faure, whereupon his wife unsuccessfully attempted to shoot herself.

In 1914, just as he was at the height of his powers, Debussy discovered he had cancer. An operation left him so debilitated that he composed nothing for over a year.

Before his death on March 25th 1918 in Paris, he completed one final masterwork, the Violin Sonata.